The medieval stone bridge, originally called a ‘gallows bridge’, was once used by packhorses to transport fleeces from Exmoor to Dunster, a Somerset market town. By the 13th century, the town was a major centre for the wool trade and was still the principal source of England’s income.

Packhorse bridges like lover’s bridge are used to transport packhorses over a stream or river. They are very common in Exmoor. Packhorses were still widely used locally up until 1830. They are typically of medieval or early post-medieval age and are often narrow and small with minimal or no parapets. These parapets are not meant to interfere with animals’ bags.

Stroll along the cobbled pathway or play pooh sticks on the medieval pedestrian bridge surrounded by lush greens and thatched cottages. You can take the route towards the bat’s castle from here. Unfortunately, only the earthworks of this Roman settlement exists today. 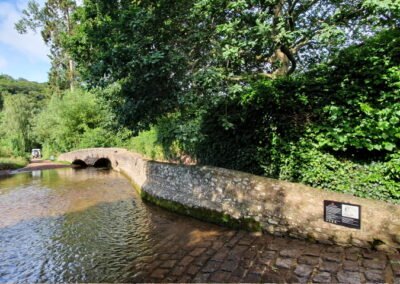